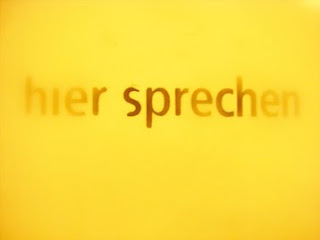 The project aims to explore field recordings and new technologies as a creative tool for location-based practices and the possibilities of working with sound as a means to engage with public places. I draw attention into sound within the context of architecture, the city and the built environment by exploiting different sourced architectural materials as instruments of sonorous and spatial interaction. According to the given space, people detect and initiate the sounds/noises through a monitored electronic system I have conceived and designed. All the playbacks have been taken from everyday places I have lived during the last four months in Berlin area. They have been edited afterwards by choosing and cutting small snippets of time and space in order to question the nature of perception. All urban artifacts I chose for the sonic interplay act as a symbolic reference for expectation and hope, loss and separation, unconscious desires and irrational fears – emotions experienced by everyone but deeply connected with the private sphere of the body where new and curious spaces can be discovered.

She was born in Central East of Italy in 1977. She moved to Florence in 1999. She studied and trained in art photography since 2001. In 2010, she graduated from the University of Brighton with a Master in Digital Media Arts. Since 2003, she has been tutoring film-based and digital photography, theory of photography, projecting artwork. She also has been lecturing history of photography and contemporary art practices. In 2006 she created and directed over four years the Studio Luce Project in Florence. She showed her photo artworks in Milan, Turin and Florence – and she published some of them in several Italian issues. In 2009 and 2010, she showed her last artwork in Lodsz, Warsaw and Berlin. In the last two years, she has worked with sound as an artistic form by incorporating physical computing systems in public and urban environments. In 2010 she achieved two interactive sound installations in Brighton. She is a PhD candidate at Goldsmiths and she is currently based in Berlin.