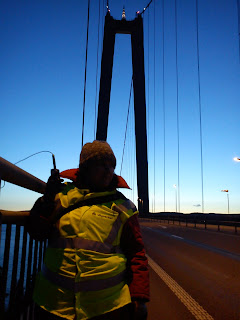 Direct from the Arctic Circle, Jodi Rose invites you to share recent works in progress and celebrate the upcoming ten year anniversary of Singing Bridges. Recordings from the construction of ‘Sleep Span,’ the ice bridge artist suite Rose made at the Ice Hotel in collaboration with Justin Tyler Tate, the High Coast Bridge in Sweden, with Björn Eriksson and working day at Lab Gallery with Nathalie Fougeras, radiphonic works from ABC Radio Residency and her plans for 2012 will be presented at Errant Bodies.

–
Born in Sydney, Jodi Rose recorded the cables on the Anzac Bridge in 1995 while it was still under construction: even then she dreamed of creating a Global Bridge Symphony. Rose created Singing Bridges in 2002, listening to the sounds of bridges singing around the world. After ten years dedicated to recording and amplifying the sounds of over sixty bridges; making on-site live installations and bridge compositions, she is ready to embark on realisation of the Global Bridge Symphony. In her ongoing process of responding to the specifics of the structure and location Rose embraces a philosophy of Art in Context, working in collaboration with artists, researchers, engineers and architects. Rose produces sonic and conceptual interventions in diverse environments, working in the context of urban spaces, sound, philosophy, media, performance and technology. Tracing her engagement with local cultural practitioners and communities, she co-creates unique ephemeral, performance, improvisation and musical works adapted to the conditions of each specific location and concept. Jodi Rose lives and works in Berlin since 2007.