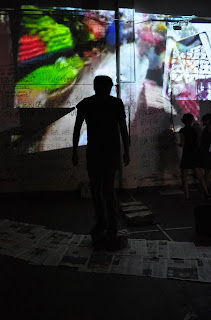 Luis Guerra is an artist and writer (1974) from Santiago de Chile. His work investigates questions of performance and materiality, often incorporating movement and text. Guerra is currently preparing his project, “Gramsci’s seminar”, to be exhibited at La Capella, Barcelona, in November-December. The “seminar” is developed as a platform for knowledge production and sharing. In addition, The Bomb Case, an article on current protests in Santiago, appears in the current issue of the Journal of Aesthetics and Protest.

Luis Guerra is currently artist in residence at Errant Bodies. His proposal focuses on considering strategies for collective performance, exploring ideas of scripting and rehearsal, collaboration and labor.