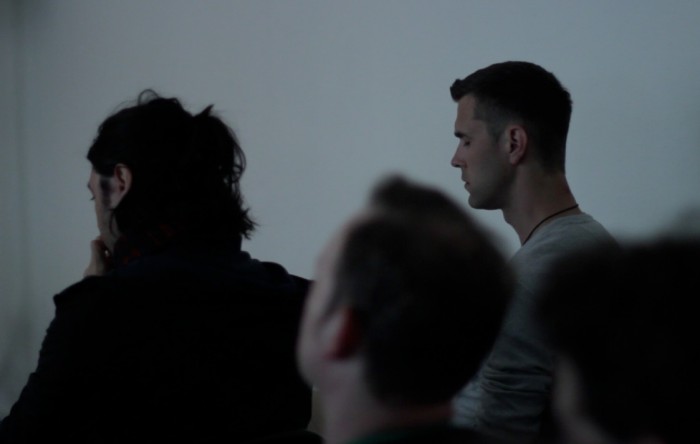 Sound piece commissioned for the project “this is the end” at Errant Bodies Berlin in May 2013 – www.thisistheendproject.com

Audio documentation of the performance:  http://www.earpolitics.net/gilaubry-soundfiles/nice-rain-errant-bodies-live-v1.mp3

Nice Rain – a soundscape of intentions is as a reflexive soundscape composition. Instead of attempting to sonically depict an existing environment via sound recording as a ‘classic’ soundscape would do, this piece focuses on the intentionality behind the recording itself by questioning the process and motivations that led to its making.

Concretely, the piece consists of a quadraphonic field recording composition, along with a text to be read by the author. The soundscape composition is made of 24 field recordings made in various places in Berlin, each one by a different sound recorder. The recorders are sound artists and anthropologists who have accepted to contribute to the project by providing one Berlin recording from their personal archive. The text is a composition by the author based on written answers by each of the recordist to the three following questions:

Why did you do this recording?

How did you do this recording?

In what ways does this recording represent your own listening experience?

During the performance, the audience is presented with a double narrative: one of recorded places as an arbitrary sound travel through Berlin and another one of intentional listening experiences described by the recorders. The two narratives are organized according to distinct principles, so that the spoken descriptions don’t necessarily refer to the recordings heard at the same time.

In short, Nice Rain is a work that refers principally to its own making, as well as to its very reception via listening. As a result, the listener is confronted with a complex listening situation which involves both at the same time his/her own auditory experience and the ones evoked successively in the recorders’ declarations. The piece further addresses the ambiguous character of the relationship between a place and its hypothetic sonic representation, while at the same time exploring the poetic, sensuous and reflexive potential of recording practices.