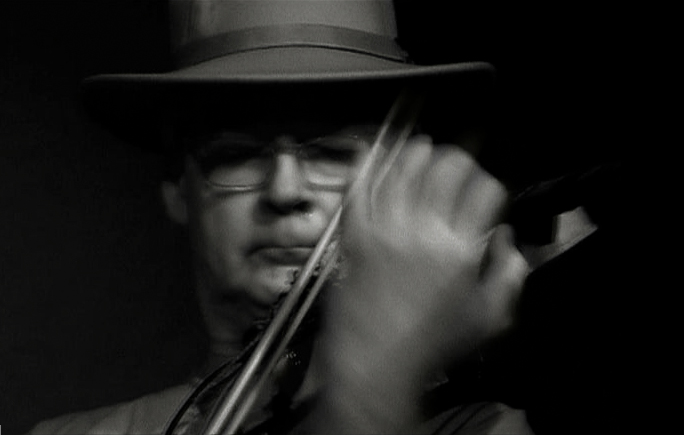 Violin player Tony Conrad was one of the pioneers of New York minimalism, of microtonal music and of “deep listening”. He worked in 1962 on La Monte Young’s “Dream Music” project with the likes of John Cale and Angus MacLise (both future members of Velvet Underground). Despite having recorded very little (or in virtue of it), he remained the purest and most ascetic of the minimalists. His compositions were long tone pieces in just intonation for bowed strings, without any melodic development, notably Four Violins (1964), and his collaboration with Faust, Outside The Dream Syndicate (1972/1973), works which, in his own words, explored the border “between pitch and rhythm”. After leaving Young’s ensemble in 1965, he focused mainly on cinema, starting with “The Flicker” (1966), a key work in structuralist filmmaking. Since the early 90s, Conrad has been performing again with Faust, as well as collaborating with musicians Jim O’Rourke, Gastr del Sol, and the Dead C. In 2009 his work was exhibited at the Venice Biennale, MoMA, the Tate Modern, and elsewhere. He is represented by Galerie Daniel Buchholz and in New York by Greene Naftali Gallery.

ORIGINALFASSUNG is a series of talks and discussions based on an understanding of collaboration rather than competition motivated by the curiosity of strangers or visitors to tap into different fields, such as science, music, architecture, art, dance, choreography, theater, film, politics, design, media, economics, journalism. ORGINALFASSUNG was initiated by Geoff Garrison, Heimo Lattner and Oliver Baurhenn in 2003.