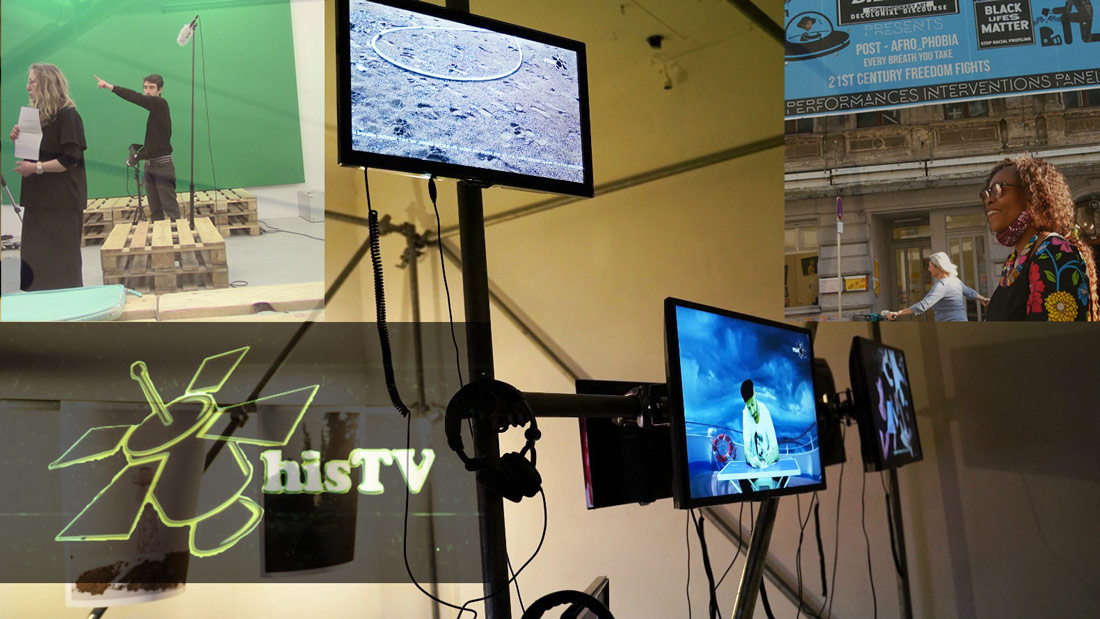 HisTV (Sense TV or Emotion TV) is a fictitious television station brought out by Apartment Project as an artistic collaboration. The collective was formed in 2016 as a reflex to the censorship and to political oppression which has settled like a fog over the freedom of expression in Turkey. Consisting of made-up TV programs, advertisements, music videos, news and public spotlights that are familiar to the mass media audiences, HisTV has been a creative and intellectual platform to search for further possibilities and ways of common reflection against authoritarianism worldwide. HisTV takes on an ironic approach by mocking the current state of the sided and non-objective media, disassembling and distorting their realites. The channel carries an open and collaborative process, allowing participants to team up and write, design, play, shoot and edit their programs on location before and over the course of the exhibition. The aim of the collective work is to figure new methodologies to communicate the severity of the situation and to find new forms of artistic and political expressions.

HisTV is reactivated on the occasion of AARC’s 2nd edition at Errant Sound.
AARC#2 — HisTV presents an engaging process-based exhibition, stimulating a critical discourse on suppression, racism and discrimination by inviting independent voices to its transmission program. To serve its purpose, the exhibition space turns into a studio, where artists and participants collectively produce video works to be broadcasted concurrently on multiple screens around the venue. Encouraging free speech and imagination, the project highlights the importance of nonalignment and diverseness in the communications industry and its crucial role when maneuvering against racism and xenophobia.

AARC (Artists Against Racism Collaborative) is a collective project conceived by Apartment Project and Errant Sound. The short form AARC refers to the word arc — arc as a bridge between artists of different fields and cultural backgrounds. At the same time, the title phonetically evokes the “AARGGH!” interjection, conveying common feelings of despair, fear, and exhaustion among the affected communities. The collectively formulated initiative develops individual and/or joint responses to such emotions and unveils everyday practices of racism. Through this collaboration, the two institutions aim to create a mutual artistic conversation and develop new forms of solidarity. The first outcome of the collaboration was the exhibition titled AARC#1 — Tortu, held between 26-28 June 2020 at Errant Sound together with live presentations at Apartment Project.

Special thanks to the members of AARC for their support in the realization of this project.