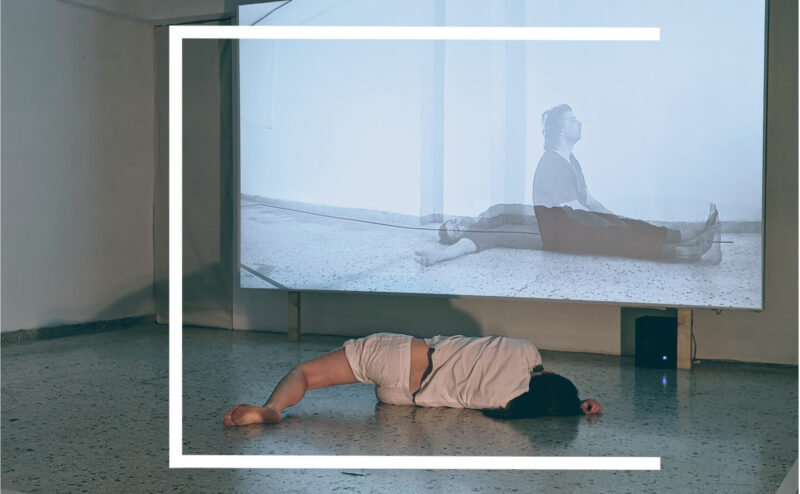 
Over the course of 7 consecutive days, this score-based installation stages the slow unfolding of a durational duet between two performers visiting the space to attune to the musical agency of 4 of our basic postures: standing, walking, sitting and lying down. As actors in the work occupying two independently progressing performance areas, they meet only by means of video transmission, a system of registration and projection which non-linearly stitches together the physical and the virtual of their individual enactments in time and place. Shaping the contingent dialogue between live performance and recorded footage, the performers’ embodiment obtains both an expressive and compositional function, tracing and evolving larger relational patterns within the work through the immediacy and idiocyncrasy of their actions. This instance of ‘presence (Un) presence’ at Errant Sound seeks to expand further the constantly shifting symmetry of spaces involved in the work, by functioning as a synchronous web-based installation as well: an online environment which further reworks composition and materials used in the gallery setting: www.presence-un-presence.online —up during opening hours of the gallery—.

‘presence (Un) presence’ is part of a current exploratory chapter of work of Martijn Tellinga, focussing on how to read principles of musical structure, temporality and process to approach the multifaceted construct of installation work. The work produced occupies an intermedium between music composition, spatial installation and durational performance, which activates site-adaptive movement and performative action, registrative techniques, text, and the architectural setting. Through such speculative musical spaces, an extended musicality is proposed: how can musical ideas travel between and convey through different mediums and situations, and function as a generative and experiential devise beyond sound and the concert setting?

Martijn Tellinga is an artist, composer and occasional performer. His practice fuses elements of concert, installation and performance art. Drawn from a reduced formalist-seeming vocabulary, his works pose reflections on the extent of compositional form and the musical agency of an evolving materiality and contextuality. They are commonly produced by means of some self-evolving system, a processual organisation, open-ended durational re-arrangement or site-specific dynamics, which in turn are aimed to work as a perceptual, performative and social medium. Much of his work is score-based and includes a wide variety of conceptual actions and chance operations, probing the emergent field between intended and accidental occurrences. He performs and exhibits his work worldwide, lectures and works in residence. With DNK-Amsterdam he is co-responsible for a long-running series of events, concerts and exhibitions. He lives and works in Amsterdam.
www.martijntellinga.nl


Dave Hall is a performance artist and dancer originally from Auckland, New Zealand now based in Berlin. His practice is largely based in improvisation, with influences from Body Weather and Butoh. His recent work has been a series of attempts to be honest on stage though he isn’t yet sure what that even means. He has worked with several artists as a dancer and performer, including: Brent Harris, Alyx Duncan, Josh Rutter, Alicia Frankovic, Brydee Rood, Saskia Oidtmann and Joshua Schwebel. He is also a founding member of dance studio collective Garage.
www.garage-tanz.de