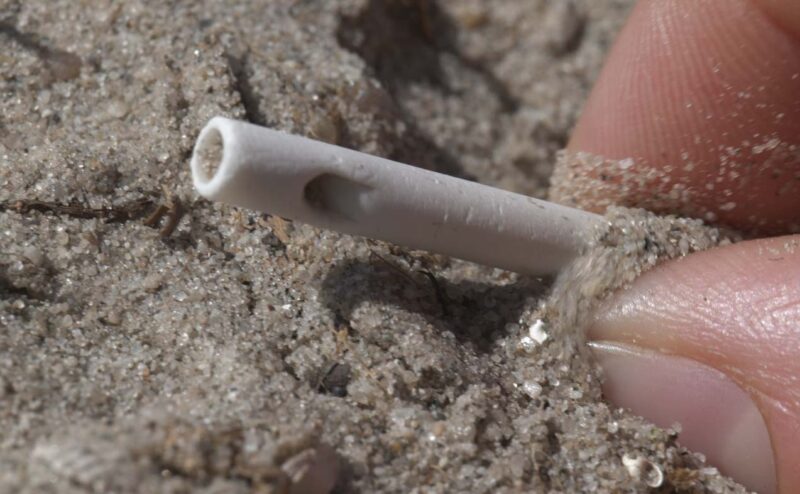 Performances will start at 20:00 (sharp) also with Livestream: https://youtu.be/JdWgGxrYYX0

In collaboration with the Chromatic Wednesday Series, initiated by Apartment Project, we will present a program with three works by three artists that relate to the theme of resonance in different ways. What they have in common is the presence of the absent. How can absence bring us into a deeper understanding and questioning the forces that are shaping what we see and perseive? The resonance in the here and now arises through the knowledge and memory in connection with our feelings.

The audiovisual artist Julia Cremers takes us in her lecture-performance to Flevoland, a newly created province of the Netherlands, that exists far below sea level. The brazilian sound artist BELLA lets sounds arise and disperse in hollow bodies. The ukrainian filmmaker Mykola Ridnyi shows us places in his hometown Kharkiv, that he filmed in 2015 and again in 2022.

In her new performance ‘The Floor‘s Ocean’ Julia Cremers dives into the Dutch technology-zealous identity of warriors against the rising water level, by taking a closer look at the province of Flevoland; an area of 1400 square kilometer that has been reclaimed from the Zuiderzee in 1986, after an intensive process of drainage and dike building.

On this former seabottom, which still lies well below sea level, greenhouses now host valuable tropical orchids, companies create green solutions to sustain production processes on an industrial scale, while microplastics in recreational areas are testimonies to the growing issue of environmental pollution.

Flevoland has a history of rapid change; from neighbouring fisher villages that needed to find new identities and incomes after “their” coastal water had been reclaimed, to the rapid overturn of commercially planted trees in the many areas of fertile clay. With playfulness, Julia Cremers proposes one more change in Flevoland’s landscape.

The object contains gove (soul). Life is not contained.

Therefore, the dust of the dead inside a vase is then blown out.

Life is returned to the ashes.

it disperses, amplifies itself.

In Regular Places, the comings and goings of citizens in five public locations around Kharkiv are filmed from a static angle. Without context, the uneventful footage at first seems irreconcilable with the brutally violent conflict between pro-Ukrainian and pro-Russian activists that occurred here only months earlier. Rupturing the calm atmosphere, audio excerpts from online videos have been overlaid on the footage: shouted threats, warnings, abuse, and intimidation echo across indifferent scenes in a forced confrontation between recent traumatic memories and the present state of collective denial. Since February 2022, the city of Kharkiv has been subjected to massive attacks by the Russian army. The artist visited his hometown and filmed the same places after they were heavily damaged by shelling.

After the screening of this 16-minutes-film, Mikola Ridnyi will give a talk (moderated by Steffi Weismann) and will answer questions from the audience.

In her performances and audio-visual installations, Julia Cremers researches the meeting point between sensoriality and virtuality. Interested in the constructed understanding of our cultural identities and our relationship to the world around us, Julia’s work observes specific ways life is able to act within (re)constructed environments. Locations of historic, cultural or economic significance are addressed as a kind of scenography.

She makes use of different worldbuilding tools, such as photogrammetry and 3D modelling. Yet, these digitised realities are always addressed from the embodied perspective of the artist herself, who subtly exposes her own artistic decisions by leaving in biometric hints like handheld camera shakes, shadows, and traces of body parts.

Julia Cremers (the Netherlands, 1993) studied Audio-Visual Art at the Gerrit Rietveld Academy in the Netherlands, completed a Master of Fine Art in Norway and currently lives in Berlin, Germany. Julia is a member of the sound art collective Errant Sound and co-organises PARALLAX Lab.

BELLA (Rio de Janeiro, Brazil) develops installations, performances, videos, field recordings and album releases, investigating the physical and magical aspects of sound and light. Her performance is to erase the boundaries between sound and space.

Master in Music in the area of Sonology by the University of São Paulo, has taken part in multiple artistic residencies in Brazil and Europe, as well as in festivals and exhibitions, among them: City as a Forest – Museum of Tomorrow; Amplify – Oi Futuro; One Beat Virtual; CTM Music Makers Hacklab; Ende Tymes Festival (New York); Sonic Matter Festival (Zurich); Digital Art Biennial; etc.

Mykola Ridnyi (born in Kharkiv, lives and works in Kyiv) is an artist, filmmaker, and curator. In 2008 he graduated from the Kharkiv State Academy of Design and Art. Ridnyi is a founding member of the artist collective SOSka group. In 2022 he curated several screening programs of Ukrainian film and video in MAXXI Rome, the Museum Folkwang Essen, the National Gallery in Sofia, and other venues. Ridnyi works across media ranging from site-specific installations and sculpture to photography and experimental films. His works have been shown in exhibitions and film festivals including Survival Kit 13 (Riga, 2022), Transmediale at HKW (Berlin, 2019), the 35th Kassel documentary film festival (2018), All the World’s Futures at the 56th Venice Biennale (2015), and other venues. http://www.mykolaridnyi.com/