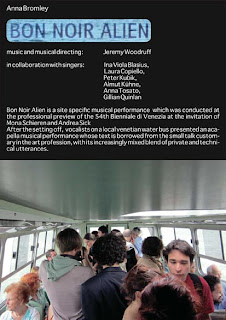 Visual Artist Anna Bromley and Composer Jeremy Woodruff will give an insight to their collaborative performance project and its background.

Bon Noir Alien is a site specific musical performance which was conducted at the professional preview of the 54th Bienniale di Venezia at the invitation of Mona Schieren and Andrea Sick. After setting off, vocalists on a local venetian water bus presented an acapella musical performance whose text is borrowed from the small talk customary in the art profession, with its increasingly mixed blend of private and technical utterances.

Anna Bromley studied Social Sciences in Berlin, worked in production for free projects of performing arts before she studied at the University of the Arts in Bremen. Her mostly auditive works discuss the relation between authenticity and public art at political and cultural locations and focus on language as an instrument of influence. Bromley’s excerpt-like re-productions that remind of radio plays meander through independent spaces that have been especially constructed for the respective context. Apart from exhibitions and projects, amongst others in the Carpenter Center Cambridge, the NCA Gallery Lahore, Thealit Bremen and Haus der Kulturen der Welt in Berlin, Bromley produces the radio show Lautstrom Project on reboot.fm together with Jeremy Woodruff.

Jeremy Woodruff studied composition with Michael Finnissy at the Royal Academy of Music in London and thereafter studied South Indian music and Ethnomusicology at the Conservatorium van Amsterdam, including field research in Chennai, Bangalore and Mysore, India. Woodruff’s pieces deconstruct the interpreter’s/collaborator’s own artistic practice by using their everyday and personal experience, attitudes and abilities as material from which to create new acoustic worlds. He collaborates on film, dance, visual art and broadcast/podcast projects in Germany and in the U.S.A. His work with artists has recently been shown at the Künstlerhaus Bremen, Kunst Hier und Jetzt in Wolfsburg, Pittsburgh Filmmakers, Robert Wilson’s Watermill Center, Clocktower Gallery in New York and with Anna Bromley in the Venice Biennale 2011. Jeremy is also an active performer of experimental/electronic music with live electronics, also using Brain Computer Interfaces with traverso, shakuhachi, Arabic and Turkish ney, kaval, and North and South Indian flute. Since 2006 he is the Director of the Neue Musikschule Berlin and is currently a PhD candidate at the University of Pittsburgh.