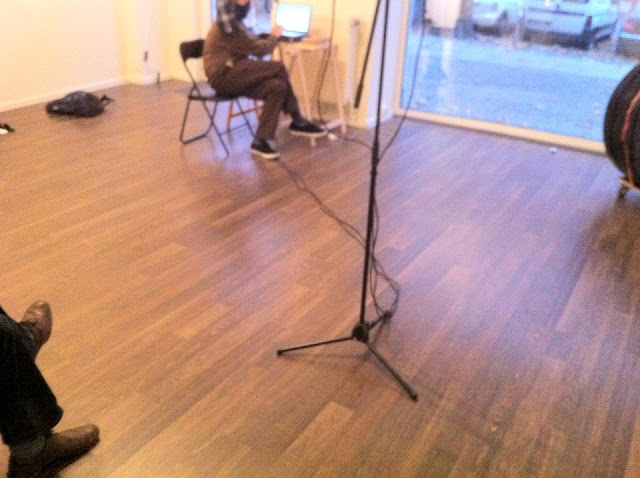 The New Silence (j.chang k.nutters mj.olsen)
Replanting A Christmas Tree.
Rebuilding A Concert Space.
A Residency @ Errant Bodies / Kollwitzstrasse 97, 10435 Berlin – http://www.errantbodies.org
3 – 8 December, 2012
The New Silence (viola, upright bass, percussion, electronic devices, objects) will be in residence at Errant Bodies from Monday to Saturday, 03 – 08 December.  Throughout the week, they will attempt to develop an extended sonic exploration of the Errant Bodies space and fuse it with previously collected sounds and experienced spaces.
Saturday 8 December: Public showing 18:00 – 20:00
The New Silence aims to further specify and articulate a location by manually adjusting the background noise during a performance or social situation, redefining the threshold of silence, thus revealing the new silence. Sounds from everyday life in the urban surroundings as well as from the building itself are examined and re-contextualized; one hears in a new way amplified refrigerators and air conditioning units, pre-recorded mechanical devices, music leaking from next door and all kinds of incidental background sounds.
Significant sonic architectural features of the venue will be highlighted and extended – as well as incorporating so-called acceptable and unacceptable surrounding noise into the landscape of a composition in such a way that the notion itself disappears from the audience’s perspective entirely. The result would be a true balance of environment and performance which is the aim of The New Silence.
Sample Sounds:
Peter Ablinger http://soundcloud.com/johnnychchang/the-new-silence-peter-ablinger
Lucio Capece http://soundcloud.com/johnnychchang/the-new-silence-presents-luciocapece
Chico Mello http://soundcloud.com/johnnychchang/the-new-silence-presents-chicomello