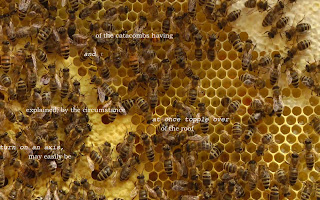 A video of bees on a honeycomb structure. The movement of the bees trigger a real time score of text and sound. A layer of rendered scrolling texts about three very different temporal processes (by Stanislav Lem, J.W. von Goethe, Maurice Maeterlink) and a 4-channel audio composition based on material from “my gait”, a longterm sound study by katrinem about her own rhythm of walking in urban space are created by a number of set rules.

A piece about perception and time, – and the process of reading and understanding.
A small hommage to Buckminster Fuller.

ORIGINALFASSUNG is a series of talks and discussions based on an understanding of collaboration rather than competition motivated by the curiosity of strangers or visitors to tap into different fields, such as science, music, architecture, art, dance, choreography, theater, film, politics, design, media, economics, journalism. ORGINALFASSUNG was initiated by Geoff Garrison, Heimo Lattner and Oliver Baurhenn in 2003.