HARDLY IN SOUND (Symphony of a Present) by Matthias Mayer 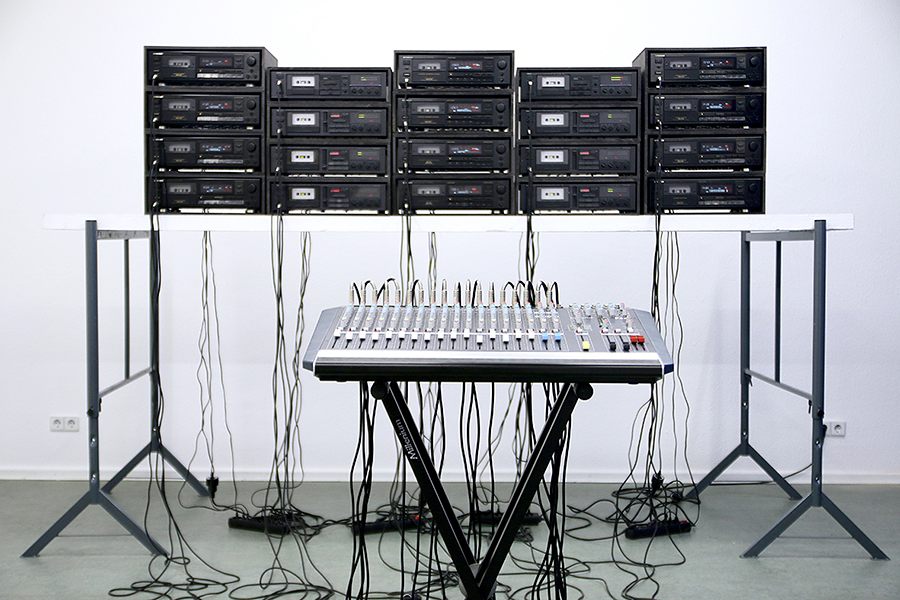 Live-Performance: Saturday, 12.09.2020, 7pm
In an experimental sound performance with over 30 vintage tape-decks, Matthias Mayer will create a cacophonic „Symphony of a Present“.

The works of Matthias Mayer deal with the interaction of music, visual arts and society. The exhibition idea for “Hardly in Sound” is based on works that interweave image, sound and narrative from certain social phenomena. At the same time, the use of analog technology creates a symbiosis of past, present and future by questioning established hearing and exploring its boundaries.

When masses of different music, noises and sounds are played and mixed together at the same time, a cacophonous sound is created that is perceived or received as rather sickly. But is this bias merely determined by decades of listening habits? What role do narratives, images and spatial situations play in this – what role do the intellect and psyche of the recipient play? Is there a dogma, a dictatorship of intact sounds? Who actually determines the character of sounds?

Matthias Mayer has been working as an artist since the early 1990s. His artistic work includes painting, sculptures, installations, videos, performances and photography. A frequent approach is to question social rules and circumstances against the background of pop culture. He is particularly interested in the interaction of visual art and music. Matthias Mayer has worked and exhibited internationally, among others as a participant of the ISCP in New York (1996/1997), as competition winner of the Museum for the History of St.Petersburg in Russia (1995) and as project participant of the Zendai Museum of Modern Art in Shanghai (2008). He received several project grants, among others from the Berlin Senate Chancellery for his project “Let the Rhythm Hit ‘Em” at Kunstraum Kreuzberg/Bethanien (2011) and for “Porte de Berlin” from Künstlerhaus Schloss Balmoral (2005). Since 2003 Matthias Mayer has been the director of the project space Spor Klübü in Wedding and has organized over 100 exhibitions there. In 2012 he founded the music project Sporty Jesus together with Jens Christian Madsen, where he is active as guitarist, singer and DJ.

listen to “Mauerpark-Produktion” on Soundcloud: