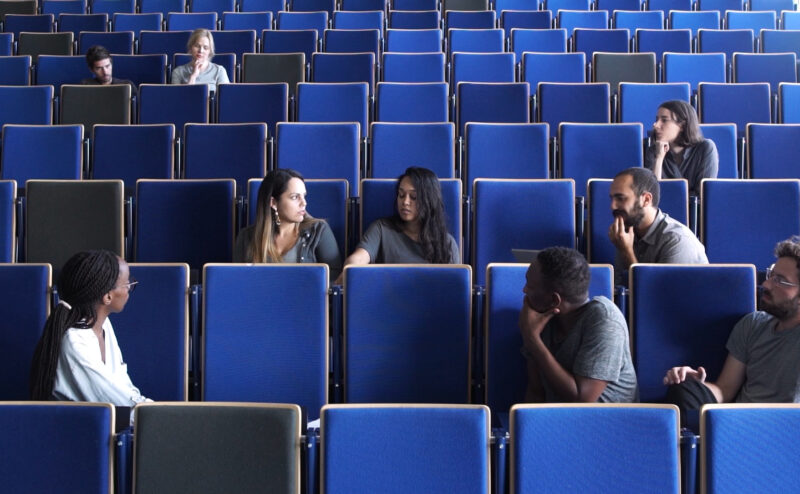 A workshop by Nicoline van Harskamp
Curated by Eugenia Delfini

Nicoline van Harskamp’s art practice considers acts of language and solidarity and addresses the development of the plurality of spoken English through video, installation, and scripted performance. For this workshop titled Englishes e Multilinguismo at Errant Sound, she will introduce the online project Englishes Mooc (2019-ongoing) and videos from the Englishes Series (2013-2016), both of which explore the modification of the English language by its non-native speakers, and the possibilities for a link language of the future. Together with Berlin based artists, editors, and writers, she will unfold questions as: How do we challenge the status of English in the art realm? What are we willing to give up for a truly multilingual practice? What will we win by doing so?

The workshop is free and is addressed to students and anyone else who is interested in the use and the investigation of non-standard forms of English, no matter their own proficiency in that language. Questions of translation, incomprehension and untranslatability will be unfolded during two workshop days that also include sessions with guest speakers.

The focus of the first day is on the audible, on the sounds that are produced in speech and the way these sounds can be received and interpreted. The second day explores the prospects for a future link language and forms of multilingualism in the globalized (art) world.

A limited number of places are available. To register please write to contact@errantsound.net by Nov 5. Priority will be given to those who can participate in both days and to those who write first. The 2G rule (vaccinated-recovered) applies for this event and face mask is required.

Project supported by the Italian Council (9th Edition, 2020), program to promote Italian contemporary art in the world by the Directorate-General for Contemporary Creativity of the Italian Ministry of Culture.

NOVEMBER 10, 2021
about producing and processing speech in a multilingual environment

15:00 – 16:30
Contribution by artist and theorist Salomé Voegelin
Voegelin will talk about the challenge listening poses to conventional language. She will propose that listening eschews language as interpretation in favour of speaking and writing as materialisation: a generative doing that does not describe and define but conjures, not with reference to lexica and taxonomies, but from the experience of the invisible, and thus has the capacity to produce a plural view.

Contribution by artist Janine Eisenächer
Eisenächer will introduce Ready Making (2019-ongoing), a performance-series on auditory knowledge in sound performances with things and Mind the Sound (2019), a research-video focusing on how we remember sonic actions with things and ways we try to verbalize and describe these through speech, vocal sounds, and bodily gestures.

17:00 – 18:00
Exercise by artist Steffi Weismann
Weismann will present a participatory exercise which will combine text-sound-transformations that lead to an expanded language based on object sounds in space and non-verbal vocal interactions. Part of this exercise is a reflection round on how to verbalize or translate the made sound experiences.

Conversation between guests and participants, moderated by Nicoline van Harskamp and Eugenia Delfini. Questions may include:

What characterises the phonology of English as link language, i.e. of Englishes?

Is it possible to really capture and process speech produced by the other?

What inequalities are caused by speaking and hearing differences?

How do intonation and musicality function as (linguistic) status markers?

What is the role of human-made sounds in (sound) art?

What does ‘collective listening’ entail? What is the future of our (artistic) link language?

NOVEMBER 11, 2021
about the potential of a multilingual (art) world

15:00 – 15.30
Introduction of the rest of the program by Nicoline van Harskamp, limited Q&A about screened works.

15.30 – 17.00
Contribution by writer and translator Vincenzo Latronico
Latronico will discuss the role of the English language in the art discourse – platform, medium, birthright, gatekeeper? – and present the film he realized in collaboration with Armin Linke and Giulia Bruno, Multilingualism at the European Court of Justice (2019). Taking its cue from the definition of multilingualism as a fundamental human right under the Charter of the European Union, the movie examines the political praxis of multilingualism inside a European institution, as a way to test the viability of forms of cross-border communication that do not assume linguistic imperialism.

Contribution by artist Stine Marie Jacobsen
Jacobsen will present two of her many projects. German for Newcomers (2016) is a grammar book and project co-created with immigrants, expats and asylum seekers, who teach readers German with their experiences of German language and bureaucracy. Pidgin Tongue (2018), a multi-language workshop concept in which children from language-conflict areas create a dictionary for a new language, transforming their idioms and different languages into a new common (step-)mother pidgin tongue.

Contribution by artist and editor Paul Sochacki
Sochacki will introduce his work on Arts of the Working Class, a multilingual street-newspaper he co-founded, that focuses on practicalities around the distribution of wealth, knowledge, and the discourses of contemporary social dynamics.

Contribution by artist Giulia Bruno
Bruno will introduce the concept of English as a technology in two of her films. Language Agents (2019) is a movie realized in collaboration with Armin Linke about Artificial Intelligence, talking robots, language games, and the characteristics of non-human communication. Artificial Act (2017-2021) is a film that examines the usage and application of Esperanto.

17:00 – 18:00
Conversation between guests and participants, moderated by Nicoline van Harskamp and Eugenia Delfini. Questions may include:

How did English become the dominant language of the (art) world?

What are existing alternatives to this dominance?

What factors maintain the linguistic status quo in the (art) world?

What does an actual multilingualism for the (art) world entail?

What are we willing to give up for a truly multilingual practice and (art) world?

What are the artistic properties of incomprehensibility?